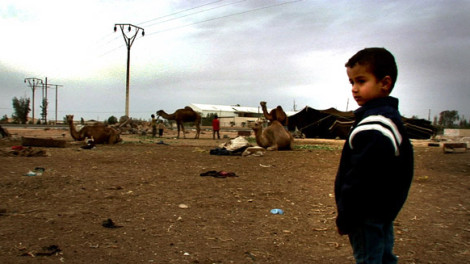 „Recycle“ (Documentary), 7:30pm at Filmrauschpalast, Lehrter Straße 35, Berlin Moabit We cordially invite you to our film and discussion evening on Jordan, which will take place on 10 October at 7:30pm in the context of our Arab Film and Discussion Series. We will be screening the documentary “Recycle” by film maker Mahmoud al Massad (2007, 82mins, Arabic with English subtitles). The film tells the personal story of an ex jihadist who lives in one of the poorest areas of the Jordanian city Zarqa. He collects waste-paper in order to make a living for himself and his family.  In these difficult circumstances he resorts to religion. But the lack of social and economic prospects and permanent setbacks drive him to the brink of desperation. The borders between “good” and “bad” are getting blurred, not only for the main character but potentially also for certain on-lookers. The film will be followed by a discussion with political scientist Hanna al-Taher, a group of Jordanian exchange students and Jordanian Moabiters, focussing on the situation of Palestinian and Syrian refugees in Jordan as well as on the effects of the so-called “Arab spring” on the country. The evening will take place in English. Attendance is free, donations are welcome. The event will take place at Filmrauschpalast, in the Kulturfabrik Berlin Moabit, Lehrter Str. 35. You can see here where the Kulturfabrik is located. 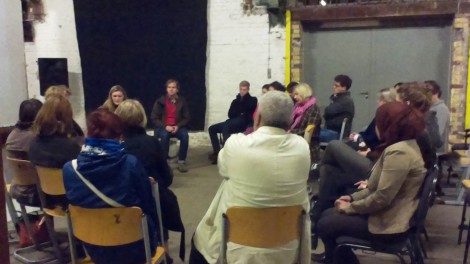 On Wednesday 18th September 2013 our third Arab Film and Discussion Evening took place - this time it was about Syria. In the documentary "THE SUFFERING GRASSES : when elephants fight, it is the grass that suffers " from Iara Lee, the conflict in Syria is represented (at the time of 2012). Different interviews, pictures, animated sequences and reports on the war events reflect the sorrow and the frustration of the Syrian civili society, who is often forced, in view of the hopelessness of the civil war situation, to participate in violent disputes or to run away and a live in refugee camps. The film also deals with the role in the conflict of other countries like Russia, China and the USA. After the film screening, Hanna Wettig from "Adopt a revolution" spoke about the Syrian civil war, the rising tension within different social and political groups in the Syrian society and answered numerous questions and comments from the public. Besides, she explained the work of "Adopt a revolution", about current projects, challenges and also critized the work of the association. Many questions and remarks from the public referred to the refugee's problem and to the (real and potential) role of Germany in this context. Also the current debate about a military intervention and the negotiations about the Syrian chemical weapons was evoked. The evening ended with considerations on a future solution of the conflict and support possibilities coming from the German society. The event, attented by approx. 30 participants, was presented by Anja Gebel (14 km), at the organization helped Johanna Kramer (trainee by 14 km) as well as the ZK/U team. We thank all guests for their coming and for the engaged participation in the discussion!  -- 14km Arab Film and Discussion Series In regular intervals we screen films which deal with different Arab countries and subsequently discuss the films and current social and political situation in the respective countries with guests from Berlin Moabit as well as with country experts, always trying to make a link to North-South relationships. 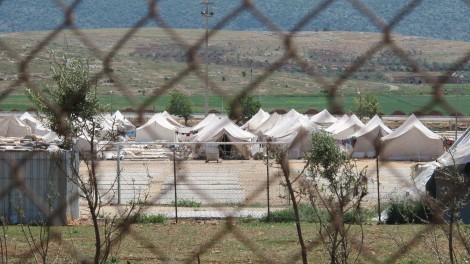 „THE SUFFERING GRASSES“ (documentary and discussion on Syria) on September 18, 2013, at 7:30pm, ZK/U, Siemensstraße 27-49, Berlin Moabit ‚14km – the shortest distance between North Africa and Europe‘ e.V. and the ZK/U cordially invite you to the third event of our Arab Film and Discussion Series. On September 18, 2013, at 7:30pm we will be screening the film „THE SUFFERING GRASSES: when elephants fight, it is the grass that suffers” (2012, 52mins, Language: Arabic/English with German subtitles) and look forward to a subsequent discussion on the situation in Syria. The documentary by Lara Lee depicts the current civil war in Syria, reflected in interviews, pictures, animated sequences and reports about the ongoing occurrences. The film focuses on the situation of the civil society which is often forced either to join the violence or to flee the country. The film also addresses the role of other countries such as Russia, China or the US in the conflict. Against the background of the film we invite you to take the opportunity and discuss the Syrian civil war, the tensions inside the Syrian society and the role of external actors with Syrians living in Moabit as well as with Hannah Wettig from “Adopt A Revolution”. Can external actors contribute to solving the conflict or not? How do people in Syria think about an eventual international intervention? How could the conflict be solved otherwise? (Presented by: Anja Gebel, 14km e.V.). Attendance is free, donations are welcome. 14km Arab Film and Discussion Series In regular intervals we screen films which deal with different Arab countries and subsequently discuss the films and current social and political situation in the respective countries with guests from Berlin Moabit as well as with country experts, always trying to make a link to North-South relationships. Our Arab Film and Discussion Series started on 22 August 2013 with an evening on Egypt. Our second event (on 4 September 2013) dealt with displacement and migration in/from Palestine.

This was our second Arab Film and Discussion Event (Palestine) 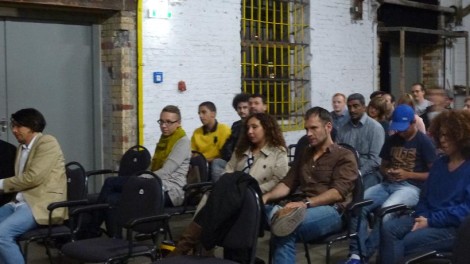 Our second Arab Film and Discussion Event was again well attended – on the 4 of September at 7:30pm around 40 participants had arrived at ZK/U in order to watch the film “Turtle’s rage”and to subsequently discuss the film and the topic of Palestinian displacement and migration with our four guests. The film approaches the topic on a very personal level. Young German filmmaker Pary El-Qalqili attempts to get closer to her Palestinian father and understand his life history through many questions and a joint trip to Palestine, simultaneously shedding light on his broken dreams and following his difficult search for home and identity. In the following talk with Musa El-Qalqili (main character of the film), Abdallah Hajjir (Imam at Haus der Weisheit in Moabit), Osama Hajjir (student of international business from Moabit) and Bernhard Schäfer (Joint Initiative on International Humanitarian Law in the Middle East) the discussion centred around the role of displacement and migration in the lives of Palestinians and in particular in the individual and family histories of the present persons with Palestinian migration background, and the different ways of dealing with it. Against the background of the Middle East conflict the audience also brought up the question how Germany could use its political influence more effectively for improving the situation of Palestinian refugees. The event was presented by Anja Gebel (14km e.V.), we would like to thank Johanna Kramer (intern at 14km e.V.) and the ZKU team for their organisational help and support. We thank the audience for their participation!