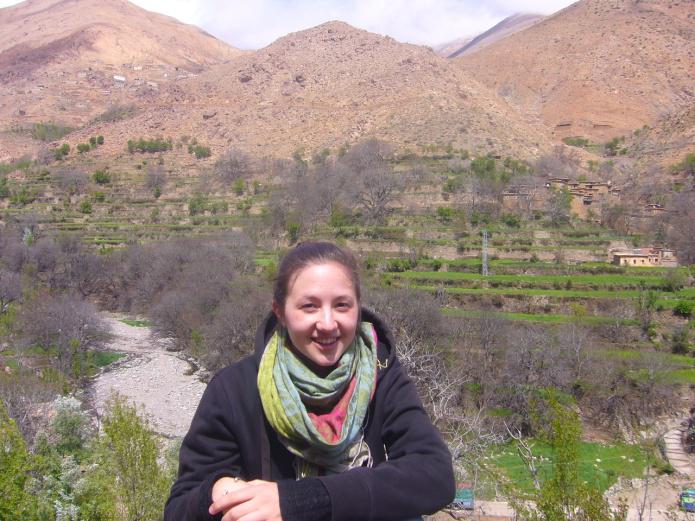 “For three weeks I have been staying in the Village Amsouzarte located in the Tifnoute Valley in the High Atlas Mountains. HAF is working in various projects to confront the economic, environmental and social challenges there. I wanted to see their work in the field and was especially interested in the role of handicraft since I have been working with women in the Community of the Oasis Siwa in Egypt. I was keen to see the differences and similarities between two Berber communities thousands of kilometers apart from each other. 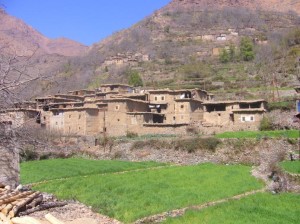 After two days in the HAF Office in Marrakesh where I could familiarize myself with the circumstances of the Tifnoute valley and the projects that HAF is realizing there, I was ready to travel to discover the situation myself. When I arrived in Amsouzarte I was stunned by the beautiful landscape. In the distance you can see the snow covered heights of the Mountains, a little closer the rocky slopes with sparse bushes are wandered by goats and their light-footed herders. And when you look deeper, lush green terraces spread out, full of trees with white and pink blossoms and Iris blooming at their edges. Between the terraces, the villages cling to the mountains, consisting of large clay houses, with a labyrinth of stairs and corridors inside to harbor the large families. On the ground of the valley, the river is paving its way through stones and fields of grass, which is cut by the women with sickles every morning to feed the animals.

I received a warm welcome by the women of Mahjoub’s family, in whose house I was staying. Although we had little ground to communicate, they showed their hospitality through enormous amounts of delicious food and a very open attitude from the very beginning. Especially Khadiga was taking care of me and introducing me to other girls and women from the neighborhood. The local community planning facilitator Fatima stayed with me in the guest room of Mahjoubs family in Amsouzarte. She is coordinating the projects in the region and the contact person for all the participants in Tifnoute valley.

I was accompanying Fatima on her various trips to the villages in the region. During my time in the Tifnoute valley, Fatima was busy talking to women in seven different villages about building a greenhouse for medicinal and aromatic plants. To achieve this goal they have to found a cooperative and work together to run the greenhouse which will be located between their villages. To introduce the women to the details of the initiative and hear their opinions we traveled to the small villages which are scattered on the slopes of the Tifnoute valley. Most of the time Fatima and I were walking because the local transport does not often find its way over the narrow earth roads towards the remote villages. Thus I had the opportunity to see a lot of the surrounding nature.

Once we arrived in the villages, the women had to be gathered. This is usually not very difficult because the villages are small and visitors attract attention. But it can be complicated if women are in the fields cutting grass for the animals or busy with their varied chores in the household. When the women are assembled, Fatima explains the project and the requirements to found a cooperative and to get the support of the government. Questions can be asked and concerns be voiced. In the end the names of all the women who wish to participate are written down. These meetings with the women were very animated, gathering women of all ages who seemed to enjoy the change in their daily routine and brimming over with invitations to come in for a tea. 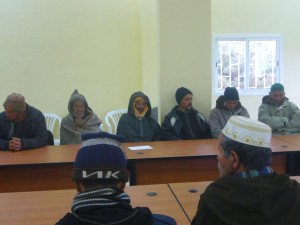 I also had the possibility to attend two meetings in the Commune in Imlil (3 km from Amsouzarte). The first one was one of the weekly meetings the farmers have to pursue their goal of producing organic walnuts, almonds and different fruits. Like the women they are in the process of forming cooperatives to be able to generate income, which their present organization in associations does not allow for. It is planned that they will work together with cooperatives from other regions to be able to sell their products on the international market. Through the organic certification of their products they will generate an added value. These additional profits will be partly used to implement other projects that are benefitting the whole community. In the meeting the farmers were informed about the legal requirements or their work as a cooperative and about the concept of organic agriculture. The men were very interested and when the Arabic legal text was introduced, there were a lot of questions that were answered by the local facilitator Omar. After spirited discussions in Tashelhit the names of those who wanted to take part in the cooperatives were taken and after a break with tea and nuts a film was shown that explained organic agriculture. 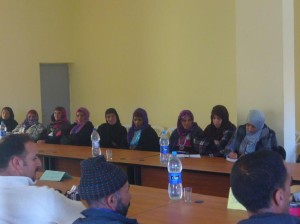 The second meeting that I could attend was about the possibilities to profit from the touristic potential of the region. It was a mixed meeting, assembling men as well as women. In the beginning a documentary about a Tamazight film festival in Tiznit was shown. This event has brought famous stars to the region and was well received by the media, making the region more attractive for tourists and better known to the public. To bring more tourists to the Tifnoute region the idea of organizing a festival of local artisanry and handicraft has been brought up. In this meeting as well there were lively discussions that I was not able to follow since they were in Tashelhit, but one of the ideas was the selling of locally produced jams. Fatima presented the initiative that the High Atlas Foundation had facilitated in which the women of Amsouzarte were taught to dye their wool with natural colors like henna, onion peels and walnut shells. All but one woman were rather quiet at this meeting, not being used to speak up in front of foreign men, but Fatima assured me that they were strongly supporting the idea and having a lot of ideas about reviving the old artisanal techniques that are unique to their culture.

The fact that I am not able to speak Tashelhit or the Moroccan Arabic called Darija did limit my possibilities to communicate with the people. Therefore my role at the meetings was mostly an observing one, trying to catch the atmosphere and taking pictures for Fatima. Nevertheless all the women were happy to talk to me through a few words of Tashelhit that I learned and a mix of languages such as French, English and High Standard Arabic.

I learned the most about the culture and the life in the High Atlas through living with the family and several visits of Fatima’s relatives which are spread all over the region. The inclusion in the daily life of the family; from observing the bread-baking on the open fire in the morning, to sharing meals every day, playing with the kids and going to the village hammam, was helping to connect with the women on a personal level and learning about the rhythm of their life’s. Attending special occasions like the henna night and the farewell reception of the bride before she leaves her family gave me an insight into the cultural and musical traditions of the region.

To connect with the many lovely children in the house and neighborhood was even easier. Without many words you can interact with the youngest ones and the older ones are very keen to try their knowledge of French and High Standard Arabic if you are willing to listen. 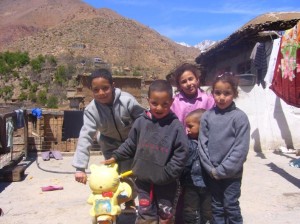 Concerning the handicraft, I discovered that the situation was quite different to the one I had experienced in Egypt. The women are much more active in the public sphere, going out to cut grass for the animals and taking part in the agricultural life. Therefore they rely much less on income through handicraft which is not an easy way to make money. The one technique that is still actively practiced is the weaving of beautiful big carpets, adorned with traditional Berber motives. The wool is being cleaned, carded and spun by hand, which is an artful craft that demands a lot of experience to create an even thread. As Fatima told me these carpets are usually not sold but used for the own homes or as part of the dowry for the bride. But the situation may change with an increasing tourism and a foreign interest in the old techniques. According to Fatima there are a lot of ancient traditions to be rediscovered in the Tifnoute valley.

I am very grateful to HAF for rendering this experience possible but especially to all the lovely people who welcomed me and treated me as one of them. I had a wonderful stay, learning a lot about the people and the culture of Tifnoute valley and about how they work together to confront the challenges that their community is meeting.”