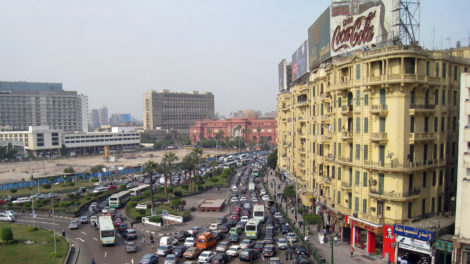 "Cairo Drive" (Documentary, Egypt, 2013, 79 min, with English subtitles) by Sherief Elkatsha on Wednesday, October 12, 2016 at 6:30 pm (screening at 7 pm) at Filmrauschpalast, Lehrter Straße 35, 10557 Berlin Moabit 14km presents the 4th film of this year's Film and Discussion Series On our fourth evening we will not only  broach the issue of Cairo's traffic, but also have a look at the past years' political and social development since the revolution in 2011. 14km screens Sherief Elkatsha's documentary "Cairo Drive" in original language (Arabic, English) with English subtitles. The film portrays people struggling in the chaotic environment of Cairene megacity traffic and paints a bigger picture of the diversity of life in the metropolis, its challenges and moments of happiness. As traffic concerns everyone, people of all parts of society appear and what they all have in common is one thing: humor. Following the screening we will have an open talk with the audienceto discuss the film as well as the director's approach in presenting the topic. We will also talk about Egypt's political, social and economic development with distinguished guests. The discussion will be held in English.   Director Sherif Elkatsha The documentary offers a unique, insightful and yet quite comical portrait of a country on the brink of change told through the metaphor of Cairo traffic. The film was shot over a three-year period before and during the Egyptian revolution in 2011. Accompanying a range of Cairo drivers, the film illustrates their daily struggle to navigate through the chaos, the unspoken rules and the more than 14 million vehicles and allows an insight into the different perspectives, sentiments and problems as well as the insecurities regarding the country’s collective identity and the people’s strong desire to get somewhere. Free entry - we appreciate donations The venue for the screening is Filmrauschpalast at the Kulturfabrik in Berlin Moabit (Lehrter Straße 35, 10557 Berlin). Facebook-Event

“I really enjoy my time.”

Michael on Lebanon and his stay with Himaya

*** Dieser Beitrag ist momentan nur auf Englisch verfügbar.*** The first thing to say about Lebanon has to be that it is the most fascinating country I have ever been. The difficult political situation, many other problems inside the Lebanese society and in the areas around mixed with the people who try to make the best out of it makes every conversation, every interaction incredibly interesting. At the same time it is also adventurous and exhausting. The traffic, especially in Beirut, is very stressful and you are very dependent on taking taxis everywhere, because of the lack of public transport. Every time leaving the house you need to be really aware of everything. Find a taxi, barge and make sure that you really get to the right place. However I never felt unsafe during the month I am here now. Everywhere you can find English speaking people who always try to help you in the best way. In general Lebanese people are quite open. It was very easy for me to meet friends, and they always love to show me around and tell me everything what they know about there country. The work at Himaya is nice so far. The team is great and they integrated me perfectly. After a few days I have not just at work, but also private contact with other colleagues. I have to mention that the language barrier is a little bit annoying at work. With a basic level in Arabic I could do much more tasks in the actual projects. There is work to do, but if you want to experience all the parts of the work in this NGO you will benefit a lot from some language skills. Thanks to 14km connecting me with Himaya. I really enjoy my time. *** Die von uns wiedergegebenen Berichte von durch uns vermittelte Praktikant/innen spiegeln nicht notwendigerweise die Sichtweise von 14km e.V. oder unseren Partnern wider.