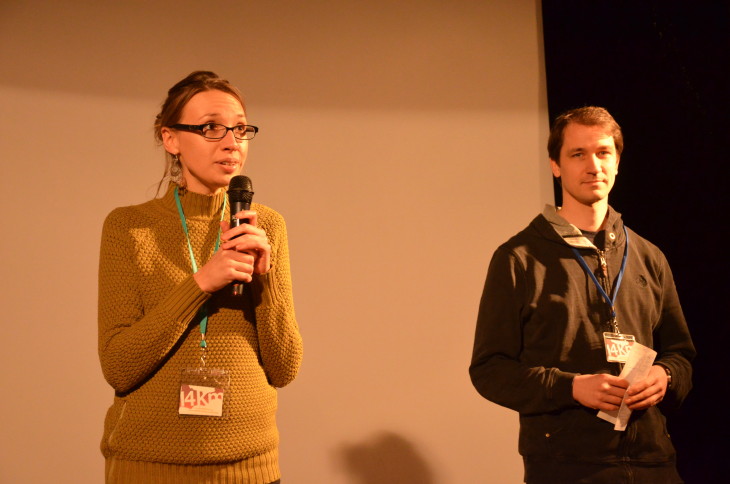 “Women’s rights should be at the top of the new list of priorities,“ said Pillay (UN High Commissioner for Human Rights) on 3 March 2011, as the wave of revolutions swept across North Africa.

In the four years since the revolution began in Tunisia, much has changed for many North African countries. In addition to political upheavals, many discussions on societal development have emerged, with the role of women in society a central theme.

The first scene of the film shows the disunity of the village community in all its clarity. Women fetch water from the remote water hole, while men sit around drinking tea. The village celebrates the birth of a child, while Karima mourns the loss of her unborn child due to an accident incurred fetching water.

Scarred by having lost a child of her own in an accident while fetching water, young Leila decides that either the men fetch the water for the community, or they are to build an aqueduct to bring water into the village. At first, Leila meets stiff resistance, not least from her own mother. But soon enough, she manages to convince her loving husband and some village elders of the merits of the plan.

Throughout, the film offers a unique portrayal of women’s lives and roles. The women of the village fondly describe the time until their 14th birthday “as the most beautiful of their lives,” when they could live freely. Then the tradition of fetching water from the remote source, losing unborn children in accidents along the way, sets in. Women are left to use their songs describing themselves as “doormats” and “load carriers for the men” to paint over their grief and frustration.

The women take to their struggle through creative means. Unable to work the fields due to the drought, men sit around drinking their tea, while the women take to the water source, arranging branches to construct a fountain and inscribing the slogan: “Your hearts are dry and thorny.”

Their expression of frustration culminates with the performance of their songs of grief at a local thanksgiving festival. A newspaper seizes the chance to publish an article detailing the situation in the village. Quick to realise the strike in this village could spread further, or that female demands might increase, the government sets about building the necessary aqueduct immediately.

With the water line constructed, the women’s self-esteem grows. At the same time, the men’s fears this could lead the women to an even greater desire of power remain unfounded in the film’s end in which the women admit “the source of women is love – the source of women is man.” The film continually portrays the struggle between traditional and modern times, taking up many taboo topics in Arab society to describe the hard fought struggle for female recognition. 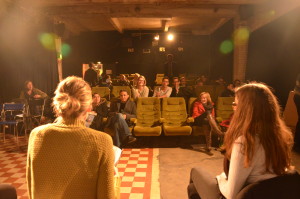 After the film, a discussion featured: Hoda Salah (doctorate in political science (PhD title: “The Political Participation of Islamic Activists in Egypt), women’s rights activist, and lecturer of political education); and Eva Christine Schmidt (current doctoral student at the Berlin Graduate School of Muslim Cultures and Societies (PhD topic: Gender Politics in Transition: The Role of Feminist Actors in the Tunisian Transition). The discussants took on the themes of the film, applying them to the respective contexts in Egypt and Tunisia.

Both speakers firstly described their overall impressions of the film. Attention was drawn to the film’s portrayal of women in villages, and contrasted against the role of women in cities – something quite different. It was importantly noted that the film did not involve Arab women, although it shared a similar concern for women struggling for their fundamental rights. Women in the city fight a different battle for their individual rights. The film tackles stereotypes, but in a different sense. For Hoda Salah, what is important is that “such films show women playing a strong role.”

Another point of interest in this movie was its ability to grapple with multiple taboo topics in Arab society. Above all, dealing with the issue of sexuality is an exciting feature. The fact that Leila had made love before marriage was, for example, a key issue in the film. With love, her husband is able to forgive her. At the same time, concerns of marital rape cannot be escaped in the film. 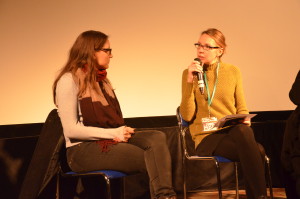 Close attention was paid to the role of women in Egypt and Tunisia, both before and after the revolution. Eva Christine Schmidt described the state’s dominant control before the revolution. Only a few small feminist organisations were able to exist then, mostly in the capital, such as the Association Tunisienne des Femmes Démocrates (ATFD) and the Union Nationale de la Femme Tunisienne. As society opened up following the revolution, a host of new feminist organisations were spawned across the country. Focus was placed on two major women’s movements – one with strong leftist tendencies and the other which promoted feminism in accordance with Islamic beliefs. It was interesting to note how the two organisations held contrasting views, making cooperation between them difficult. 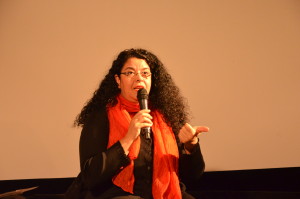 Hoda Salah described the role of women in Egypt in four phases, which all influenced the women’s movement as it is today. Egypt had one of the earliest women’s movements in the Arab world. A demonstration in Tahrir Square in 1933 following a conference in Italy saw women remove their headscarves – a strong show of freedom. And yet, today, the granddaughters of these pioneering women are back to wearing the headscarf, and refrain from simply adopting western traditions. Tensions have grown between these two approaches in Egypt. At the same time, those tensions are sometimes overstated: the struggle for rights can be described as an elitist struggle of the middle and upper classes – at least where individual rights are concerned. The basic fundamental rights of those women in the village in the film are a different matter. Priorities change when faced with such pressing real life issues.

The audience offered some further perspectives on the role of women, particularly regaring their physical strength. The polarisation of society was highlighted. It was noted how men were deemed physically strong, while women were viewed as weaker – and how this view was intrinsic to the beliefs of the village.

The importance of the revolutions to feminist activism was also noted. The idea that change need not necessarily be institutional was an important take away from the revolution. Rather than following leaders, young people could formulate and develop their own ideas together. A good example was the way flash mobs of Tunisian feminists joined together as the “Femen” activist group.
That said, institutional struggles for feminism in Tunisia remain an important force. Unlike in Egypt, there are institutions and organisations in Tunisia that go out to the villages directly aiming to bring about changes in education and strengthen the independence of women.

Furthermore, the role of men is an integral part of the struggle for women’s rights. While women are concerned with their own struggle for rights, it is important to also tackle the clear role of men as the financial centre of the family. Unemployed men suffer both social and familial humiliation. Trampling on men’s rights is not a sustainable solution – both sets of rights need to be considered and respected.

Questions from the audience concluded the discussion, probing the discourse on women’s issues in the respective countries. The speakers addressed questions on the nature of this discourse. They cited examples of public demonstrations following the rape of woman at the hands of Tunisian police, and manifestations against Egypt’s Muslim Brotherhood, who had weakened the role of women in society. It was clear that such actions demonstrate the important political role of women in both countries.

A final question suggested that more independent thinking from adolescents could serve as a catalyst for change. A major rethinking is needed to consider women not only as future housewives, but also as independent workers. Yet educational institutions tend to fail to instil such independent thoughts among the youth – uncritical rote learning and memorisation of facts is a staple in Egypt’s educational system. The internet and its possibilities for self-learning, however, offers an important opportunity to break with traditional education.

Overall, the clear takeaway message was that of the different considerations of the role of women across society and between villages and towns. While the revolution in many ways helped to strengthen the role of women in society, the range of currents and understandings of this role continue to search for a common path. Youth are crucial to exploring and harmonising these different paths.

Many thanks to the speakers and all the guests for coming and engaging in a fascinating discussion. A special thanks also goes to Hoda Salah and Eva Christine Schmidt for providing such interesting background information on the situation of women in Tunisia and Egypt.

Event’s Invitation with additional informations about “The Source”

Further films about Women’s Rights in our 14km Film Database