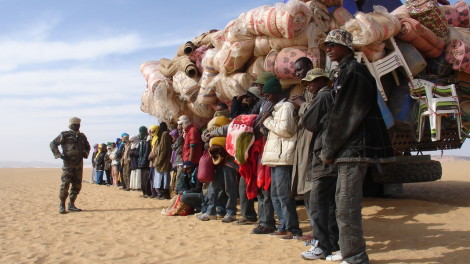 “14 KILÓMETROS” (feature, Spain 2008, original version with German subtitles, 95 min – screening on 35mm celluloid!) by Gerardo Olivares on Wednesday, 28th October 2015 at 6:30 p.m. (1830) at Filmrauschpalast, Lehrter Straße 35, 10557 Berlin-Moabit 14km.org presents the sixth evening screening of the 2015 “14km Film and Discussion Series.”: In the semi-documentary film, “14 KILOMETERS – The Pursuit of Happiness” (Hausa/French/Tamasheq/Arabic with German subtitles), Spanish director Gerado Olivares tells the story of three men’s escape from Mali and Niger to Europe, highlighting the hardships of the route through the desert. The three men hope to cross the last 14 kilometers across the sea to reach a better life in Europe. Following the film screening, special guests and the audience will discuss the motives and conditions of fleeing and migrating from North Africa, as well as the reactions and viewpoints on migration in Europe. Attendance is free, donations are welcome. Facebook-Event The event takes place at Filmrauschpalast cinema, on the 1st floor of the Kulturfabrik's backyard building in Berlin Moabit: Lehrter Straße 35, 10557 Berlin. Press Kit "14 Kilometers" film (German) The discussion ends at 22:00 (10 pm) at the latest. Facebook event The 14km Film and Discussion Series 2015 gets sponsorship by budgetary funds of the Federal State of Berlin – Office for Development Cooperation. Further events are scheduled as followed: 18 November / 9 December The events are dedicatet to a single country or specific topic, in order to give an artistic-documentary impression . The ensuing audience discussion aims to include further informations by an affected person living in Berlin and by an scientific expert, always aiming to make links to North-South relationships. We express thanks for the support: