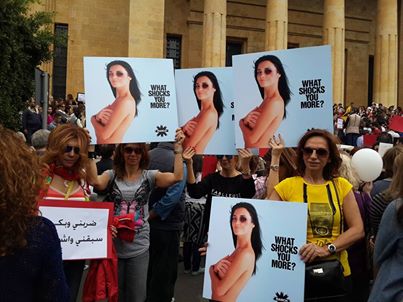 “As I was interested in doing an internship in the MENA-Region, 14km proposed me at the beginning of January 2014 to work with MARCH in Beirut, an NGO which fights against censorship and encourages freedom of expression in Lebanon. I directly went to their website to see their activities and the team: they are young, dynamic, have a lot of cultural and political projects. The work seemed very interesting and, even if I was a little bit afraid of the political situation in this region (civil war in Syria, Hezbollah bomb attacks, affronts in Tripoli, etc.), I agreed to go there. After I spoke with Stephanie, the very kind Youth and Artists Networker at MARCH, about the details I booked my flight tickets. 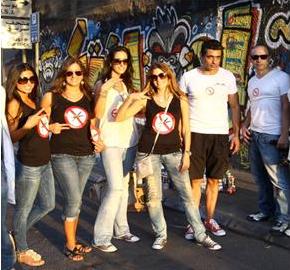 Picture on the left: The team

Then I arrived in Lebanon and I spent more than one month in Beirut. MARCH has one office near the city-centre of Beirut, in a very pretty old traditional neighbourhood, just next to Saint-Joseph University. I was surprised to see that the office is a new, clean and big place. MARCH is sharing this big space with another organisation, but it doesn’t represent any inconvenience. 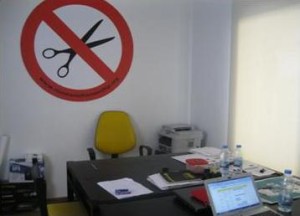 Picture on the right: The office

When I spoke to Stephanie on Skype before going to Lebanon, she told me that I would be integrated in a project which aims to create a theatre play with members and representatives of different religious communities. In fact, this project was not yet launching as I was in Beirut, so I worked on another main project of MARCH, the virtual museum of censorship.

This untypical museum is actually a website which registers all that has been censored in Lebanon since the 1940’s. This can be books, movies and TV-shows as well as music, theatre plays, press articles, radio shows, events or works of art. I was charged to reorganize and to update the data on the website. I looked for artists, theatre pieces, CD, movies, etc. which are or have been censored in Lebanon but which were not on the website and then I added them to the data base. To fulfil those updating und reorganization tasks I also wrote biographies, add information about some data for the website, corrected mistakes, called and interviewed directors of bookstores, interviewed persons in charge of movies’ and music’s command in Virgin, read reports on censorship and press articles about cultural life in Lebanon. My main task was to research whether the information on the website was still true, i.e. if that book or that movie is still censored or not anymore, and why, by whom, etc.

I found this research task sometimes too repetitive, but at the end I realized that I learnt quite a lot about the censorship mechanisms and the political system in Lebanon. It helped me to better understand the geo-political situation in this area and the relationships between Israel, Palestine and Lebanon, the situation of the refugees, the religious conflicts, etc. I also discovered new books, movies or music that I didn’t know before and finally it allowed me to discover the work in a small Lebanese association. I only worked with Lebanese people, who were speaking English, French and Arabic, often in the same sentence. I mostly worked with Linda, a volunteer at MARCH since one year, and Stephanie, the youth and artists networker. I was sometimes alone in the office because the two girls are still studying at the university. We didn’t do things together out of the office but they were very nice with me.

With MARCH, I also took part in a demonstration against the violence against women on March 8, 2014, the women’s day. They created a campaign for this demonstration which was referring to the scandal of Jackie Chamoun, a Lebanese skier who posed naked for a calendar. The motto of MARCH campaign on this occasion was: “What shocks you more?” and was a real success. 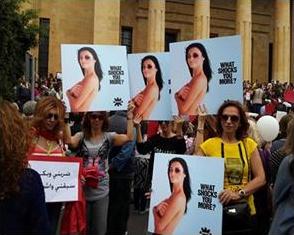 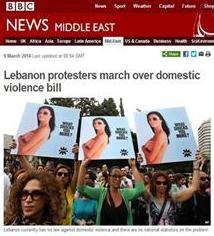 Pictures on the right: The demonstration on March 8th, 2014 and a BBC press article on the MARCH campaign 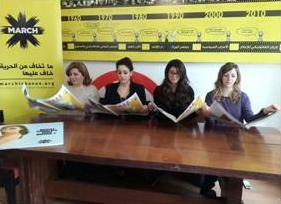 Picture on the left: MARCH team during the shooting of the campaign video (Sarah from Marcalea, Linda, Stephanie and me)

Linda from MARCH found me an accommodation. I found it expensive for what I got (I didn’t have neither hot water nor internet every day), but the accommodations in Beirut are expensive anyway. However, it was a good location (Sodeco Square), near Saint-Joseph University, the French embassy and especially near MARCH office.

Picture on the right: A street in Beirut, Achrafieh 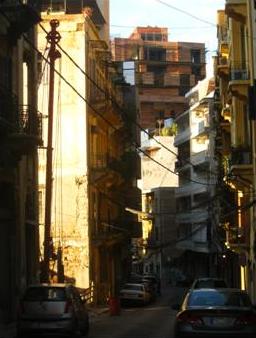 We can often read in tour guides that Lebanese people are hospitable and very kind; I must say that it is true. As I said above, they often speak Arabic, English and French – especially in the Christian communities. It is not hard to meet and speak with Lebanese people even if we don’t speak Arabic. However, it is more convenient to speak at least a few words of Arabic for the everyday life. It is possible to take Arabic courses in Beirut, a lot of organisations or institutes are offering classes. 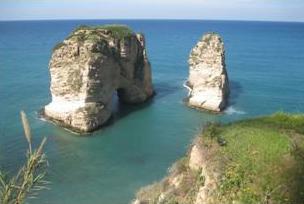 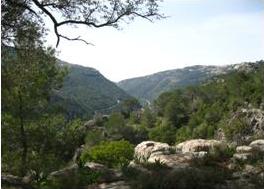 I only have one regret: I wish I could have stayed more than one month because Lebanon is such a fascinating country. It is really worth visiting it. Since it is a small country, it is possible to travel in buses, in service (a van or a taxi shared with other people) or in taxi. Public transports don’t really exist. To travel in Lebanon is not expensive but could be difficult, because everything is spontaneous, nothing is clearly defined. But this also means that everything is possible. I also went to Jordan, which is also worth it, it’s very easy to go there and it is not very expensive.
Unfortunately, it might be the only neighbouring country we could visit when we are in Lebanon: of course we can’t really go to Syria and it is forbidden to re-enter the Lebanese territory if we have been in Israel… 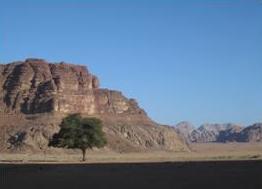 The political situation in Lebanon is still very tense (there are for example 1 million Syrian refugees in April 2014, which represents 25% of the population) and there are some places where it is difficult to go alone as a European tourist, and furthermore as a European female tourist, such as Baalbeck, the boarder with Syria or the Beqaa valley, but it is still safer in the touristic places and in the other parts of the country. 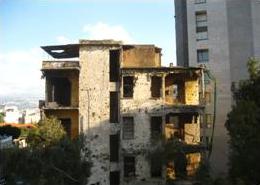 Picture on the right: A building destroyed during the Civil War (on the former “Green Line”, demarcation line separating the Christian and the Muslim factions) 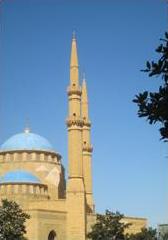 Lebanon has a lot of Roman and Phoenician ruins and monuments but they are not very well preserved and just a few policies of conservation of the patrimony exist, so I think we have to enjoy the present time to go to Lebanon before the cultural heritage is replaced by modern constructions or worse, before the war bursts again. We can still see some scraps of the Lebanese civil war (1975-1990) on some monuments, neither the population nor the government have the money to restore those buildings. Near those falling houses, brand new buildings are built, mostly for rich business men from the Gulf States. 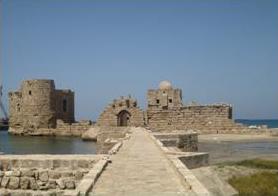 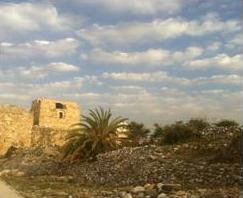 Lebanon is the country of great contrasts and Beirut is a city which is evolving every day. Those are also the reasons why I really loved my experience in Lebanon and why I warmly thank 14km to have given me the opportunity to go there.”