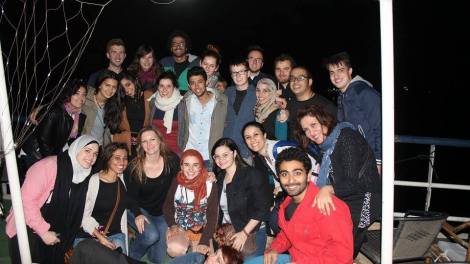 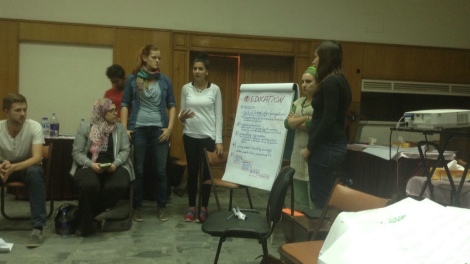 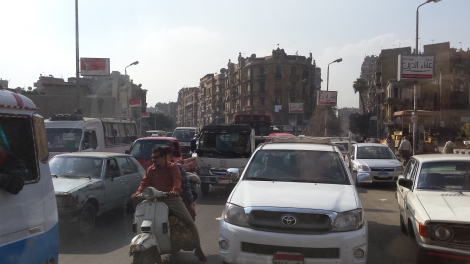 Today started with a very creative exercise . After a quick introduction to the definition of interreligious relationships we shared our personal experiences about this topic. In groups we came up with drawings, a photo story and theaters to present our ideas. The results were very interesting because we heard about problems with interreligious marriage but also about harmony and cooperation between religious communities. In the afternoon we explored Christianity in Egypt. We did so by visiting a Coptic Church, a Greek Orthodox Church and also the Ben Ezra Synagogue in Coptic Cairo. Afterwards we had a discussion with a Coptic Priest about the role of Christianity in the Egyptian state and it's status as a minority. Our day ended with a traditional Egyptian dinner on a Faluka on the River Nile. We were joined by Ramesh de Silva, the cultural attachè of the German embassy in Cairo. Authors: Adrian, Carol, Diva and Svenja     A project as part of the German-Egyptian Transformation Partnership The ReliXchange project receives financial support by the German-Egyptian Transformation  Partnership through the German Foreign Office, by funds of the Ecclesiastical Development Services through Bread for the World - Protestant Church Development Service and by the “International Youth Work” Programme of the German Federal Child and Youth Plan through BKJ 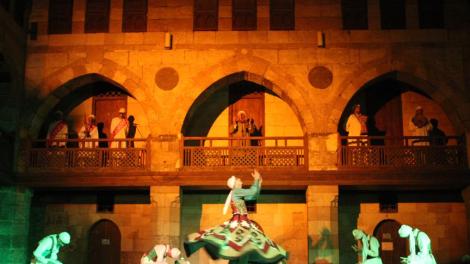 Discovering Cairo’s religious treasures… Our second day in Egypt included plenty of activities, encounters and impressions. In the morning, we took a look at some contemporary religious music from Egypt. We tried to analyze how it pictures women in religion. After our group discussion scholar Omaima Abou-Bakr provided us with some more information about the position of women in Islam – also pointing out controversies among Muslim scholars in nowadays society. Later in the day we visited the NHASD headquarter where we got to know more about the two most important institutions  for Islamic faith in Egypt – the al Azhar and the Ministery of Endowment.               Apart from all these discussions and encounters, we got to see some of the city today. Namely, the Citadel and the 18th century Muhammed Ali Ottoman mosque, which’s architecture has been considerably inspired by the Hagia Sofia in Turkey. From the Mokattom Hill we had a beautiful view over the ancient quarters of Cairo. Just like in Berlin, where we met up with some Bahaii people, in Cairo we also learned about a religious minority: the Sufi communities in Egypt. We visited a Sufi dance and music performance. Afterwards, most of us took a  stroll over the nearby market.                 A project as part of the German-Egyptian Transformation Partnership The ReliXchange project receives financial support by the German-Egyptian Transformation  Partnership through the German Foreign Office, by funds of the Ecclesiastical Development Services through Bread for the World - Protestant Church Development Service and by the “International Youth Work” Programme of the German Federal Child and Youth Plan through BKJ 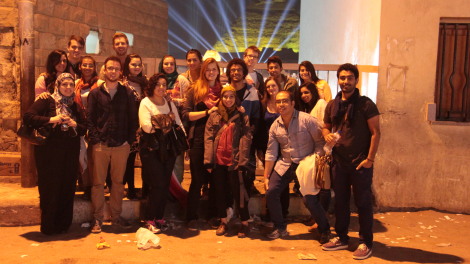