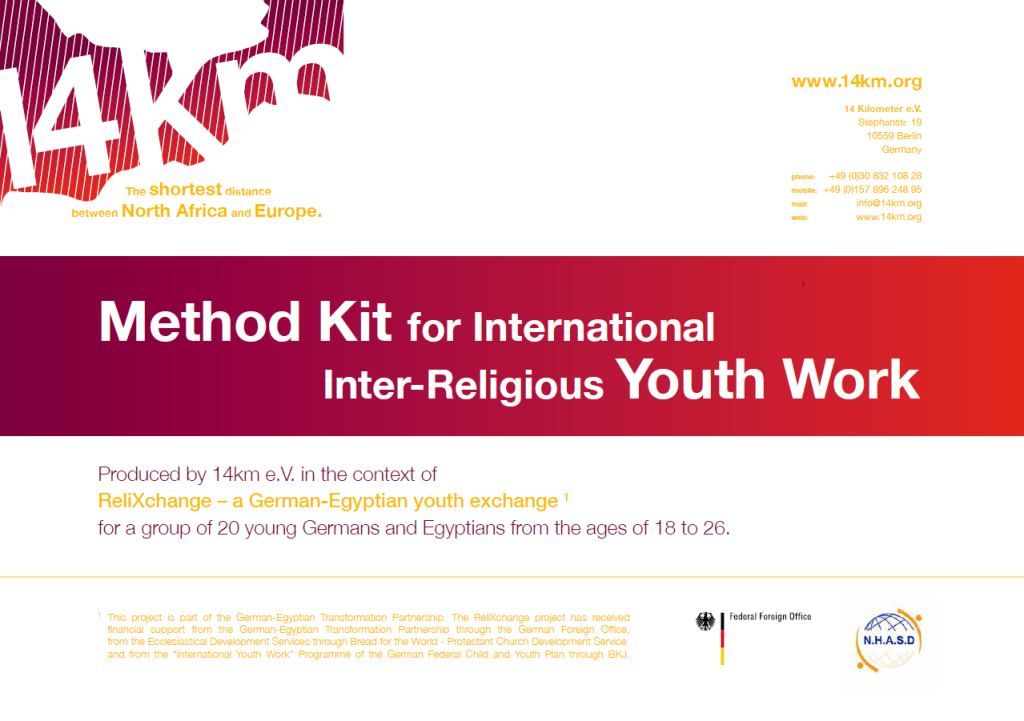 Produced by 14km e.V. in the context of “ReliXchange – a German-Egyptian youth exchange” for a group of 20 young Germans and Egyptians from the ages of 18 to 26. This project is part of the German-Egyptian Transformation Partnership. The ReliXchange project has received financial support from the German-Egyptian Transformation Partnership through the German Foreign Office, from the Ecclesiastical Development Services through Bread for the World – Protestant Church Development Service and from the “International Youth Work” Programme of the German Federal Child and Youth Plan through BKJ.
Download the method kit here: English version / German version / Arabic version.

The aim of this method kit
This method kit aims to provide anyone interested in inter-religious dialogue with a set of methods that can be used in projects, and other activities, which pertain to foster inter-religious dialogue and cooperation. The method kit can serve as an inspiration, or as a concrete toolbox. It might be helpful for youth workers, teachers, NGO workers, church groups, staff at foundations, free lance trainers, young people planning their own project, to list but a few, though this is certainly not exhaustive.

The background of the development of this method kit
The methods included in this kit were all applied in an inter-religious youth exchange titled “ReliXchange – a German-Egyptian youth exchange” implemented by the NGO “14km – the shortest distance between North Africa and Europe” (14km) and its Egyptian partner organisation “New Horizon Association for Social Development” in Berlin and Cairo.
We at 14km and three specialist trainers (Gihan Abou Zeid, Sara-Duana Meyer, Giovanni Santo and Islam El-Ghazouly) collected, adapted and developed a variety of methods which were designed especially for this project to suit our focus on learning about religion and religious communities in Germany and Egypt. This means that this method kit also includes methods that have not been developed by 14km itself or others in the context of “ReliXchange” but that have – in this or a similar form – been created by others and are freely available online. These methods dealt with aspects such as the situation of religious minorities, inter-religious dialogue, and inter-cultural learning. At the end of this youth exchange, all the methods applied were evaluated by the young participants in the projects and (if necessary) further developed together with them.

Why we want to share this
We are very proud of our successful project. But the important thing about this project is not that we implemented it, but rather that it helped to foster inter-religious dialogue and cooperation between young people from different religious and cultural backgrounds. This was our aim, which we did not give up on but maintained also after the project. In light of this, we would love to see other people contributing to this goal as well. For this reason, we decided to compile the methods we used and developed during the project into this method kit and to make it feely available under the Creative Commons licence CC BY SA 3.0.
By the way, we are by no means the first ones to adopt this philosophy. Increasingly, there are wider developments towards supporting free education and publishing so-called “open educational resources”, often under Creative Commons (CC) licences (for more information about Creative Commons and licensing see http://creativecommons.org/). And it makes sense! If you produce materials for the purpose of education, their application is not limited to the small circle of people who are the first to enjoy them. Instead, a much larger community can potentially benefit from them. Additionally, the internet makes it so much easier to share information that there are hardly any reasons left to keep your educational materials to yourself if you really want them to fulfil what they were meant for: to educate.

The kinds of methods included in this kit
The exercises described in this method kit are particularly suited to young adults between the ages of 18 and 26, from different religious and cultural backgrounds. However, many of these methods can (and should!) be adapted to suit other age groups, group constellations and themes.
As you will discover, the method kit includes many creative-artistic methods (such as theatre, music, and digital media works) for dealing with religious/cultural differences and promoting inter-religious dialogue and cooperation. We emphasised this in our project as we believe that artistic and playful methods have the potential to foster positive group experiences across (actual or assumed) social barriers. These methods form an important complement to the more cognitively oriented activities such as discussion rounds, which always run the risk of over-emphasising differences. Also, such creative-artistic methods, which do not rely primarily on language as a tool for communication, are particularly well suited for international exchanges where language may be another barrier to connecting people.

Let us know what you think, and continue sharing
We wish you all the best for your project or activity! Tell us about your experiences using our method kit, as we would be very happy to receive your feedback! If you know of other methods that are suitable for inter-religious youth work and you would like to share them, please send them to us and we will be delighted to include them on this web page.
Download the method kit here: English version / German version / Arabic version.

The ReliXchange project receives financial support by the German-Egyptian Transformation Partnership through the German Foreign Office, by funds of the Ecclesiastical Development Services through Bread for the World – Protestant Church Development Service and by the “International Youth Work” Programme of the German Federal Child and Youth Plan through BKJ.