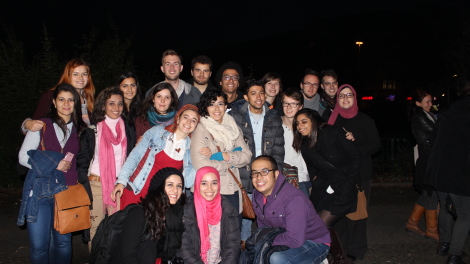 The missing piece: Introducing Islam Jewish minority, Christian majority: How is the relation between these two groups in Germany? Our fifth day started out with a reflection about the experiences we made so far concerning these two religions. Two of our insights: While Christianity is taking a strong influence on the state level (e.g. church tax, churches as responsible bodies of kinder-gardens, homes for senior citizens etc.), Judaism takes on a passive role, rather being the object of politics than shaping them itself. Also, we figured that the way we are perceiving public sphere and religious symbols present in it is deeply influenced by our cultural background. Having already been able to gain lots of insights into Christianity and Judaism, we also got to know Islam a little bit by visiting the Sehitlik mosque today. An interesting side fact to all of us: This mosque belongs to the biggest Muslim community in Germany. Further elaborating on our morning discussion concerning the treatment of religious minority groups in Germany, we talked about the five pillars of Islam as well as about the history and current situation of Muslims in Germany. We appreciated a lot that although the focus of our project lies clearly on Christianity, Judaism and Islam, today we met some people of another religion, some Bahá'í people, as well. Only a few of us - both on the German and the Egyptian side - had heard about this religion before.   A project as part of the German-Egyptian Transformation Partnership The ReliXchange project receives financial support by the German-Egyptian Transformation  Partnership through the German Foreign Office, by funds of the Ecclesiastical Development Services through Bread for the World - Protestant Church Development Service and by the “International Youth Work” Programme of the German Federal Child and Youth Plan through BKJ